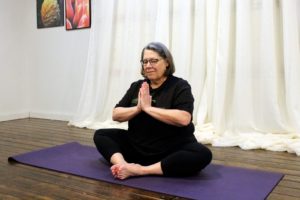 How did I come to yoga, and stick with it for two plus years? I had dabbled in yoga, first after I graduated from college and moved to Port Angeles, and then a few years ago at the school where I taught before I retired. Both of those experiences were fairly short-lived, but the idea of practicing yoga didn’t go away. I believe I liked the idea of practicing yoga, and once I began going to yoga class, I realized that yoga is much harder than it looks.

My son’s girlfriend, a dedicated practitioner, invited me to my first class at Poser Yoga. I think she paid for my attendance that day, but I’m not really sure. Downward Dog absolutely killed me – trouble getting into the pose, shaking arms, desperate thoughts, and that was just the first one that day! However, I went back. I’m kind of surprised I did, to be honest, because the physical part of yoga wasn’t all that much fun. It was very challenging.

But then something started to happen, and yoga became more than the poses. One day the question was asked – what do you want out of yoga? I realized I didn’t want to be one of those old ladies who fall over, break my hip, and that’s it – down and out. I wanted balance and strength, and if it wasn’t too much to ask for, a bit of grace. I’ve never felt totally comfortable in my body; maybe this was a way to find that acceptance. And, I wanted to be a retired person who lived long and healthy, and I had a good feeling that yoga might be part of how I reinvented myself.

When I go to yoga now, my head is in a very different place. I practice, for the most part, with my eyes closed. I focus on my breathing. I’ve gotten a lot stronger, and so some of those poses that get held, Downward Dog, Chair, Warrior I and II, are very manageable and holdable – I’m not begging in my mind for release. And if something is too much, I have no problem dropping into Tabletop or Child’s Pose; I’m not competing with anyone. I’ve come a long way since that first session.

What would I say to someone thinking about starting a yoga practice? It’s harder than it looks, but it’s very doable. Your practice is unique to you. Use the props, and don’t feel as if that’s cheating – it isn’t. Appreciate breathing, and don’t be surprised when your breathing gets better, too. Wait for the quiet in the practice, and not just in the studio, in your mind. And appreciate the community that comes together – that final clearing breath, the collective Om, and Namaste bring it all full circle. It’s an hour that really does honor the divine in all of us.

And that’s my yoga story.