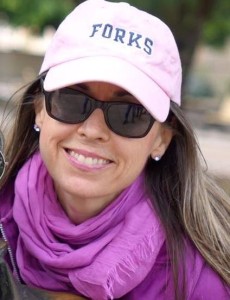 If yoga teachers were Disney characters, I would be Goofy.

Teaching over the past year at Poser Yoga, I’ve said oh, so many goofy things. I’ve come very close to falling out of various poses, including ones I’ve done thousands of times.

At the same time, I’ve felt enveloped in a sense of gratitude — for those poses, for the studio and especially for you yogis. Morning after morning and on many evenings, you agreed to go with me on that unpredictable journey called a yoga class.

As you know, it isn’t easy to slow down and breathe deep. But when we get together, si, se puede. Thank you for this.

Now I’m heading into the great unknown: My husband Phil and I are setting out Oct. 1 on an extended trip to Europe, where we will work on a book together. It’s about the love affair between his father, who served in France and Luxembourg during World War II, and his mother, who received daily letters from her young husband while he was overseas.

We are coming back to Port Angeles in December, but for how long after that we don’t yet know. So I must resign from Poser Yoga on Sept. 30.

There’s no other way to say it: I hate leaving this place.

I’ve been working since I was 15, so I’ve seen a lot of dysfunctional environments. I don’t have to tell you that co-workers can be nasty-competitive, self-absorbed and full-up with negativity.

These are steely women; also very flexible but not into showing off.

They’re funny and self-effacing, too. I once asked Wendy, “Did you get to a point as a teacher where you felt like you’d found your groove?”

Mind you, I’ve never seen Wendy f— it up. I have seen her rock the house with her teaching, time after time. But when you’re up there, one mistake can feel like a disaster. You keep going, and thank goodness there’s another chance, another pose, another inhale-exhale right there to see you through.

So I’ll say it again, and I’ll keep thinking it as I think of the yogis at Poser. Thank you. Thank you for teaching me about yoga and life.