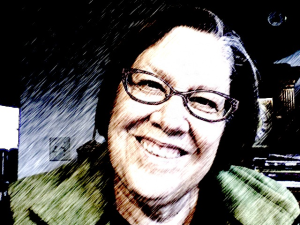 I’ll be the first to admit that my attendance at yoga can be sporadic. I try for once a week, and am generally very happy with twice a week, and if I make it to a third practice, it’s both great and somewhat unusual. And because I’m retired, I don’t have a schedule that makes sense to anyone but me. However, when I want to go to yoga, I’m there. And it was going well for me until I got injured.

I’m not exactly sure where I got hurt, but I know it was from overuse. In addition to yoga, I also work out at Cageworx, and on Tuesdays, I zip over from the 4:00 yoga class to the 5:00 fitness kickboxing class, and I also go to the Wednesday & Friday noon classes.  While yoga is mostly gentle, and very introspective, fitness kickboxing is just the opposite. There is loud music, it’s very active, and there is hitting and kicking accompanied by a lot of sweat. It’s a different bunch of muscle groups, and much like yoga, it’s fun to see improvements. In yoga, it’s holding chair longer or level arms in Warrior II, while in kickboxing, it’s hitting the heavy bag harder and improving on various kicks. And, for me, improving my biceps. Such a small thing, but my accomplishment nonetheless.

The injury happened at home, but it was for a sort of prideful dumb moment – I was showing off my new, improved push up to my husband. I was part way down, and all of a sudden it just hurt – what just happened?! That put a stop to that push up in a big hurry, and I didn’t think too much about it until a couple of days later when my entire shoulder and collarbone hurt. And since I’m not a fan of  pain, I quit going – to everything.

So now what? The shoulder and other connected parts are feeling better, and I haven’t done a pushup since then. I ice it down when I need to. I’ve pretty much stayed home, and gone back to walking. But the problem is, I miss yoga!! I miss kickboxing!! I miss exercise that makes me sweat and contemplate life!! It’s absolutely no fun to get injured, and while I know I have to take it easy, I want to go back. And more than that, I feel disconnected from the studio and the people who are also practicing with me. I feel part of this particular community, and I didn’t realize how much I had come to rely on, and appreciate this. As I listen to my body, I’m ready to reconnect….back to the mat. Back to yoga twice a week, and kickboxing fitness twice a week. Back to my version of a schedule.